Never miss a new book! We'll talk books, special offers, recommendations and other topics when you sign up for my newsletter.

One more step. You'll receive an "opt-in" email to confirm your wish to join the Joanne Pence News list.

IF I LOVED YOU

A nearly bankrupt caterer. An author with writer's block. Two people. One cabin. And it has ghosts ...

Buy If I Loved You:

Paperback and Large Print: Available or can be ordered from local bookstores or online.

THIS CAN'T BE LOVE

When an advice columnist's love life is so troubled she's dubbed a "runaway bride," the ghosts in the remote cabin she runs to can't make life much worse ... or can they? Especially when they're thought to be matchmakers.

Buy This Can't Be Love:

Paperback and Large Print: Available or can be ordered from local bookstores or online.

Three ghosts. A remote cabin in Idaho. Now, a love-avoiding loner and her mysterious lodger need to learn the secrets behind the ghosts … and the cabin.

Paperback and Large Print: Available or can be ordered from local bookstores and online.

A long-lost diary, a rare book of ghost stories, and unrelenting nightmares combine to send archeologist Michael Rempart on a forbidden journey into the occult and his own past.

When Michael returns to his family home after more than a decade-long absence, he is rocked by the emotion and intensity of the memories it awakens. His father is reclusive, secretive, and obsessed with alchemy and its secrets—secrets that Michael possesses. He believes the way to end this sudden onslaught of nightmares is to confront his disturbing past.

But he soon learns he isn’t the only one under attack. Others in his life are also being tormented by demonic nightmares that turn into a deadly reality. Forces from this world and other realms threaten madness and death unless they obtain the powerful, ancient secrets in Michael’s possession. Their violence creates an urgency Michael cannot ignore. The key to defeating them seems to lie in a land of dreams inhabited by ghosts … and demons.

From the windswept shores of Cape Cod to a mystical land where samurai and daimyo once walked, Michael must find a way to stop not only the demons, but his own father. Yet, doing so, he fears may unleash an ancient evil upon the world that he will be powerless to contain.


Click here to read the opening of Ancient Illusions.

Click here for the History Behind the Ancient Secrets Novels.

Paperback: Available (or can be ordered) from local bookstores and online.

A murder. Missing children. And the crimes have only begun.

When Homicide Inspector Rebecca Mayfield investigates the murder of a delivery man and the disappearance of his two children, she suddenly finds herself a target. Boyfriend Richie Amalfi is convinced someone with position and power in the city's government wants Rebecca out of her job ... or dead. But who? And why?

As Rebecca becomes increasingly embroiled in a murder investigation with surprising and far-reaching tentacles, Richie intervenes on his own to keep her safe. He must use every weapon he has, including people with dubious ties to well-placed politicians, to learn about the sinister, unseen forces against her, and what to do about them.

But when the very people he thinks are targeting Rebecca become targets themselves, the situation turns even more deadly.

Don't miss Seven O'Clock Target as Rebecca and Richie deal with one of the most personally dangerous cases in her career.

The best-selling Inspector Rebecca Mayfield series combines fast-paced mysteries with a touch of humor and a hint of romance. Starting with One O'Clock Hustle, you'll find the hours just seem to fly by.

Paperback: Available for order from local bookstores or online at Amazon and BN.com.

Click here to learn about ALL the Rebecca Mayfield mysteries...the clock begins at one...

Click on book cover for more information. All are available as ebooks and in paperback and most are also in LARGE PRINT.

Gourmet cook Angie Amalfi-Smith is starting a new phase of her life with a husband and a home to call her own. But one old problem still plagues her: finding a job, or business, or anything, that will make her days productive and rewarding.

Click here to learn about the mysteries in the Angie & Friends Food & Spirits series.

Cozy mystery book lovers have been treated to a steady diet of scrumptious Angie Amalfi culinary mysteries since the mid-1990's. The books are a banquet of mostly Italian entrees and desserts, as befitting Angie Amalfi's heritage. In this cookbook, you'll find fifty fabulous dessert recipes, including an easy tiramisu, a simple cannoli, lots of biscotti, as well as a number of non-Italian but still mouth-wa 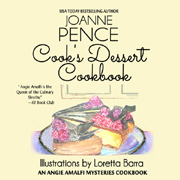 tering recipes such as almond praline meringue cake, linzer torte, and even some French macarons.

The recipes and the whimsical watercolors that go along with them are derived from family favorites of the cookbook's author (the award-winning USA Today bestselling author of the Angie Amalfi mysteries) and its illustrator (an award-winning watercolor artist), who happen to be sisters. They hope this unique and easy-to-use cookbook will become a permanent part of any cookbook collection.

Paperback: Available for order from local bookstores or online at Amazon and BN.com.

Dance with a Gunfighter

The Ghost of Squire House

The Battle for Chinatown